The Granary Building is Guelph’s oldest industrial building. Also, known as the Gooderham and Worts Granary, it was first erected in 1858 as a frame structure to be used as a depot for grain by the Toronto-based distillery as it was strategically located to the CP Rail tracks. Pictured here in a drawing done between 1880 and 1885 when the building was 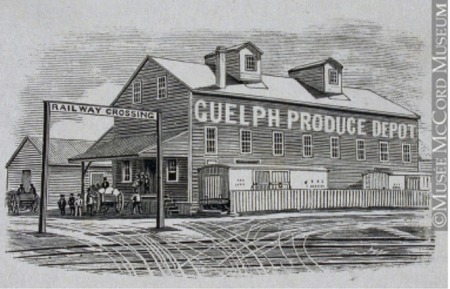 used as a produce depot.

In 1914, it was covered in brick veneer and used as a fruit and vegetable produce depot for the Walker Company. Over the next few decades, the building served different owners’ needs, but by early 1990’s it was falling into disrepair.

In 1994, Sev Peloso, along with Guelph architect Karl Briestensky and General Contractor Guido Gatto, undertook a massive transformation and restoration of the building by extending the roof lines of the north and south sections of the building and installing a new floor. This undertaking completely changed the exterior look of the building, giving it the appearance of one solid structure. Modern rectangular steel beams and massive glass windows were used to create a "spider-web appearance” in the new interior space. In the old interior of the building, the 100 years old wood floors were exposed and the beautiful century-old brick and 12-inch square, hand-hewn wooden beams sandblasted and restored.  The newly renovated building became the Walker Office Complex offering 40,000 square feet of space to private companies. As the Guelph Mercury said of Peloso, Briestensky and Gatto’s work – " 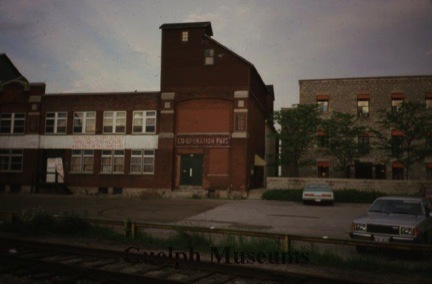 In the spring of 2012, the building was purchased by Tyrcathlen Partners a Guelph-based company that acquires and repurposes urban heritage properties for commercial and residential purposes. In recognition of the building’s origins, it was re-named "The Granary Building.”  The new owners’ aim to retain the Granary Building’s current atmosphere as a professional office complex, while expanding the tenant base of private companies, non-governmental and governmental organizations, as technology and innovation practices and entrepreneurial endeavors. Improvements to the building exterior and common interior spaces are in the works including incorporating energy efficiencies and environmentally sound building elements into all renovations or changes.

To find out more information about The Granary Building or to set up an appointment to view please e-mail info@tyrcathlen.ca or call (519) 823-2974.